(Ok apparently it was just due to an old CEmu version, it's fine now) 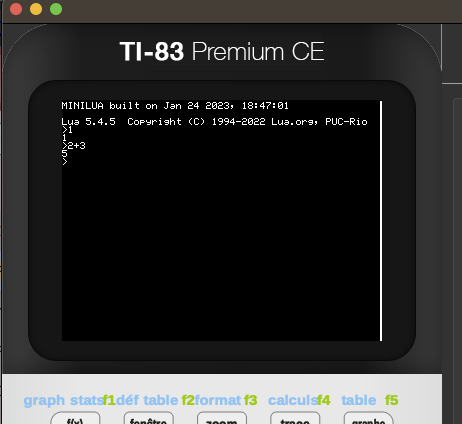 Ok, now it does not reboot with the latest nightly build.

Everything is working now. I have a better understanding on app splitting. One question: what is the maximum size for a splitted app? Is it limited to half the free flash size?

With the way that the installer currently works, yes, it won't be possible to install an app that's larger than about half the amount of free archive, since the app is allocated before the variables containing its data are deleted. If your app is large enough that that becomes an issue, I could probably use a more complicated installer that works a page at a time.

This will indeed be an issue. The smallest size of a KhiCAS port is the Casio FXCG50 port in 1 file, it is 2M large and I had a hard work by hand to make a light version discarding some parts of giac (like geometry). I expect a future ez80 port to be a little bit smaller than a sh4 port, but fitting in less than 1.5M would be a big challenge.

I have a somewhat better understanding on how things work, here is a summary, please correct me if I'm wrong.

A few other things that are worth noting:
In other news, I'm basically done with an installer that's capable of installing much larger apps. At this point it's mostly just figuring out how to integrate it into the build system.

commandblockguy wrote:The default data section for apps is not stored in userMem and is substantially smaller than that of a regular program. I forget the exact amount but believe it's under 5 KB. BSS and the stack are still in the same place.

On the monochrom Casio, giac data is about 1K (ro data is of course much larger, about 160K), it should fit without any change.

AppVars in RAM can move around, and I believe that the result of os_MemChk does as well, if variables or files are modified.

Then it's not an option, except for a temporary buffer (like for example allocating the structure for the complete catalog of khicas commands).

The stack can definitely be moved around if necessary, though I believe several OS routines have checks for stack overflow that assume that the stack is in the default position.

If the checks are "as usual", they will only check that the stack pointer is >= to the system stack low at D1A87E-4K, they won't check that it's <= to D1A87E. Therefore if the stack is moved somewhere above D1A87E, it should not be a real problem, is this correct?

You could statically allocate memory at userMem, but this requires you to call InsertMem and update asm_prgm_size, and it needs to happen in the crt script before dynamic libraries are loaded. I could probably add an option to app_tools to do this automatically and use userMem for the data section.

I don't need memory for the data section, I need memory for the stack. 16K would probably be sufficient, maybe 20K (20K is what we have on the Casio, but the 83 will probably require less with many data structs of size 3 instead of 4). If we have access to more memory (say another 16K), giac may store some fixed-size data that are normally heap-allocated, this spares memory and is faster.

In other news, I'm basically done with an installer that's capable of installing much larger apps. At this point it's mostly just figuring out how to integrate it into the build system.

Great news!
Thank you a lot!

12345
-
Donations / Premium
For more contests, prizes, reviews, helping us pay the server and domains...
Donate
Discover the the advantages of a donor account !
JoinRejoignez the donors and/or premium!les donateurs et/ou premium !